US Army Role in the Pacific - 5 Tasks

Army Would Have 5 ‘Core Tasks’ in a Pacific Conflict​

Secretary Wormuth said the service is keenly watching U.S. talks with regional allies over access to bases, including for new weapons.​

The Army will have five “core tasks” in an Indo-Pacific conflict, which it can accomplish without a dramatic expansion of its permanent presence, Army Secretary Christine Wormuth said Wednesday.

The first task will be securing and establishing joint bases and staging areas for air and naval forces, Wormuth said during an event on China’s power with the Center for Strategic and International Studies. It will also be prepared to provide “integrated air and missile defense” and quick reaction forces.
This makes the Army the “linchpin service” for the joint force, she said, implicitly shrugging off perceptions that the service plays second fiddle in the region.

In its second task, the Army will operate much of the backbone of a secure communication network and create supply chain networks to forces distributed throughout the region. It will also maintain stockpiles of munitions and forward arming and refueling points.

The Army will also help synchronize, sustain, and defend operations through a scalable joint headquarters as its third task, Wormuth said.

The fourth task is providing ground-based fires such as hypersonic weapons, a mid-range missile, and precision strike missiles, all three of which will begin fielding in 2023, Wormuth said. Those weapons would likely initially be based in U.S. territory, but the State Department and the Pentagon are talking to close allies about overseas locations. “We will be able to interdict fires across sea lines of communication, suppress enemy air defenses, and provide counter fires against mobile targets,” she said.

The Army’s fifth task, if required, will be to counterattack with infantry and aviation “to restore the territorial integrity of our allies and partners,” Wormuth said.

As well, any conflict in the Pacific can be expected to include cyber attacks on critical infrastructure back in the United States. The Army would support civil authorities as they would during a natural disaster, though the scale of cyber attacks would be much bigger, she said.
Click to expand... 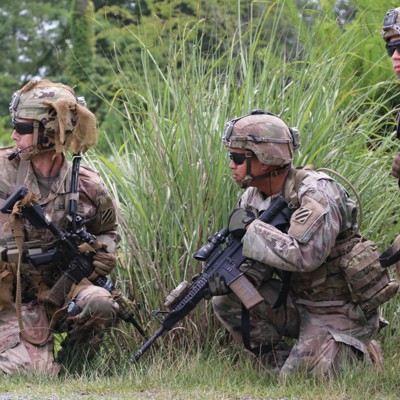 Army Would Have 5 ‘Core Tasks’ in a Pacific Conflict

Secretary Wormuth said the service is keenly watching U.S. talks with regional allies over access to bases, including for new weapons.

Soldiers will be joined by Air Force and Navy assets, the Marine Corps’ 3rd Marine Littoral Regiment and partner forces in the form of three infantry companies, one each from the Philippines, Indonesia and Thailand.
Click to expand...

On the other hand the exercise lead is not the USMC but the US Army, which already has the Light Amphibious Warship fleet the USMC is asking for. 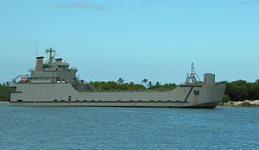 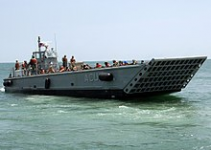 The 25th Infantry Division Hui Ha'a team performs during the Joint Pacific Multinational Readiness Training Center opening ceremony on Area X-Ray at Schofield Barracks, Hawaii, Oct. 20, 2022. (Pfc. Mariah Aguilar/Army)
Correction: This article was updated at 1:40 p.m. Oct. 28, 2022, to note that this is not the first brigade rotation at JPMRC in Hawaii.
More than 6,000 soldiers are headed into the “box” this weekend as part of a combat training center rotation across the Hawaiian islands designed to replicate a fight with China.

The main force, 2nd Brigade Combat Team, 25th Infantry Division, will take on a geared-up opposition force from the 196th Infantry Brigade starting this weekend. They will run drills until Nov. 9, Army officials said.
The work they’re doing will be simulated to project a regional conflict far beyond the training rounds flying in the box. That’s part of the Army’s exportable combat training center program labeled the Joint Pacific Multinational Readiness Center, the first new combat training center in decades.

By Davis Winkie
The JPMRC saw another major exercise earlier this year with an arctic rotation in March that used Alaska-based units and other units to run large-scale combat operations training in a cold weather environment.

Gen. Charles Flynn, commander of U.S. Army Pacific, and Brig. Gen. Jeffrey VanAntwerp, deputy commander of operations for the 25th Infantry Division, told reporters on a conference call Thursday that the exercise allows forces to build readiness in theater.
That, Flynn said, gives units more training time in a realistic environment and makes it easier for nations in the region to participate. 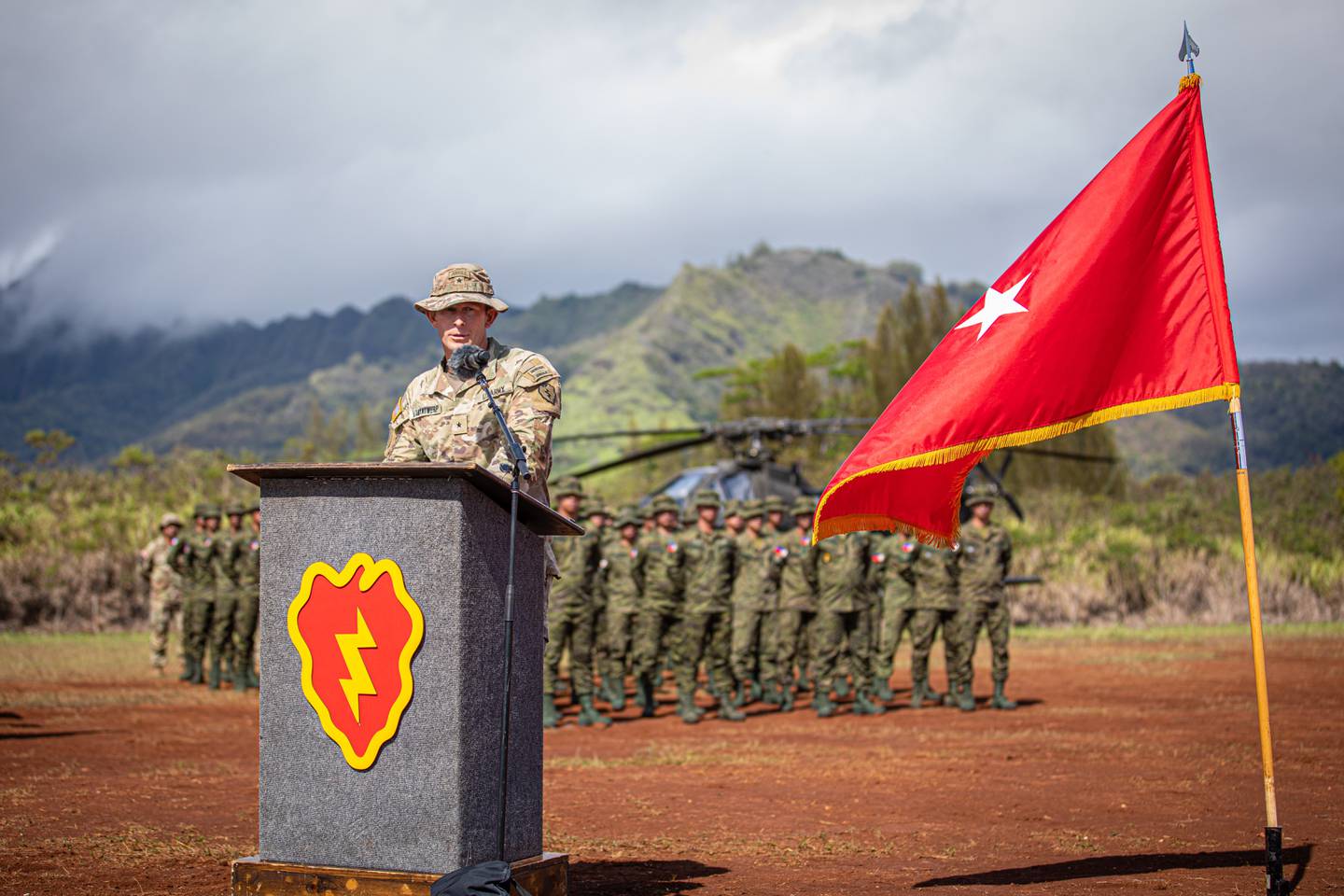 Brig. Gen. Jeffrey VanAntwerp speaks during the Joint Pacific Multinational Readiness Training Center rotation 23-01 opening ceremony on Area X-Ray at Schofield Barracks, Hawaii, Oct. 20, 2022. (Pfc. Mariah Aguilar/Army)
“So, the Joint Readiness Training Center in (Fort Polk) Louisiana does not look like Southeast Asia,” Flynn said. “But these eight Hawaiian Islands certainly do.”
Soldiers will be joined by Air Force and Navy assets, the Marine Corps’ 3rd Marine Littoral Regiment and partner forces in the form of three infantry companies, one each from the Philippines, Indonesia and Thailand.

The plan is to conduct one JPMRC training event each year in Hawaii, Alaska and at another location in the region.
The Army built the exportable combat training center package through contributions from the existing combat training centers and work at the Program Executive Office-Simulation, Training and Instrumentation.
The package allows for training cadre to tie in live, virtual and constructed simulations. That combination can help replicate theater-level operations and planning.
A commander on the ground in the Hawaiian jungle can communicate with partner forces on other islands or across the Pacific. Officers in the command centers can then react to developments outside the training zone, much like they would in actual large-scale combat.

Soldiers from the Indonesian Army participate in the Joint Pacific Multinational Readiness Training Center rotation 23-01 opening ceremony on Area X-Ray at Schofield Barracks, Hawaii, Oct. 20, 2022. (Pfc. Mariah Aguilar/Army)
The 196th Infantry Brigade is a U.S. Army unit using two battalions in this exercise. But they’ll be running and gunning as if they were a Chinese unit — using small drones, jamming and other means to get inside the heads of their opponents, VanAntwerp said.
The blue force commanders will also experiment with commercial communications platforms during the training event, he said.
“By distributing this brigade over multiple islands, we intend to really put some stress on their sustainment and their command and control,” VanAntwerp added.

Flynn added that Army units will also experiment with watercraft in ways they couldn’t do at training centers back in the continental United States.
The four-star noted how logistically challenging it can be for Pacific-based units to return to the continental United States for mandatory training.
“You know, it really doesn’t make sense,” Flynn said. “There’s a reason we have a training center in Europe, and we don’t bring tactical forces back from Europe to the continental United States to train. We just never created a combat training center out here in the Pacific.”
The same logic applies to U.S. soldiers based in Arctic environments.
“There’s absolutely no reason to bring forces out of the Arctic Circle and Alaska to Louisiana in the winter,” he said. “They need to stay up there in the winter and train in the winter so we can learn how to live and operate, so we can fight in those conditions.”
The Army developed the exportable combat training center last year, but it’s not the first time that the Pacific has had elements of a combat training center in its backyard.
Flynn said when he commanded the 25th ID in 2014 the then-USARPAC commander, Gen. Vincent Brooks, brought two sensor control centers from the National Training Center at Fort Irwin, California, out to Hawaii to conduct training.
But units were on a kind of conveyor belt for pre-deployment training to U.S. Central Command which meant it still made sense to go to JRTC or NTC regardless of their home station location.
The vision, Flynn said, is for partner nations to replicate the training experience that the U.S. combat training centers provide and then link those disparate training centers across the region for theater-level training.

"The Joint Readiness Training Center in Louisiana does not look like Southeast Asia,” Flynn said. “But these eight Hawaiian Islands certainly do.”

As the world moves on, veterans of the Afghanistan withdrawal struggle to join them