Some Military Engineer trolling of the Russians by the Ukrainians.

https://www.reddit.com/r/ukraine/comments/usamud
And it may explain how the Ukrainians have crossed the Siversky Donets River and Reservoir so easily to get to the Vovchansk side. Of course everything is likely to be easier when you have friends on both sides of the crossing point.

And another reason the Russians are having difficulty with the Ukrainians. The 9:05 from Kyiv-Nizhyn after the power went out.

And another one for the Engineers - a demo team.

And on the training front

Excellent article from the LA Times on the psychology of war.

The servicemen say atrocities aren’t directly ordered from above; instead, they result from a Russian military culture that glorifies ardor in battle, portrays the enemy as inhuman and has no effective system of accountability.

War Has No Rules for Russian Forces Fighting in Chechnya

Troops admit committing atrocities against guerrillas and civilians. It's part of the military culture of impunity, they say. But many now have troubled consciences. "I remember a Chechen female sniper. We just tore her apart with two armored personnel carriers, having tied her ankles with steel…

President Zelenskyy giving a seminar on Information Warfare at Cannes.

SO Croatia seeks to expand its influence in the world. I guess 1993 never happened. Jerks

https://twitter.com/i/web/status/1526222097617502209
Forbes article about Ukraine standing up a new Brigade in Krivyi Rih from scratch with scratch soldiers.


The Territorials got a new General on May 16. Two days ago.

Kherson with its vital seaport was one of the first Ukrainian cities Russian forces seized after rolling north from occupied Crimea on Feb. 24. Liberating Kherson is a top priority in Kyiv.

While Ukrainian forces are counterattacking along the southern front, they’re not yet driving straight for Kherson. A lack of fresh heavy forces could explain why. One of the only undamaged Ukrainian formations in the southern sector, the reserve 5th Tank Brigade, is part of the defensive garrison in Odesa, Ukraine’s most important seaport, 75 miles west of Kherson.

If the 5th Tank isn’t going to ride east to jumpstart a Kherson counteroffensive, Ukrainian commanders in the sector are going to have to draw heavy forces from somewhere else. The Kryvyi Rih training video is a hint that those forces already are forming.

The video, which circulated on social media starting around May 12, depicts Colonel-General Oleksandr Syrsky, head of the Kyiv’s ground forces, observing Ukrainian army soldiers—many of them young and obviously inexperienced—practicing small-unit tactics with a mix of donated and Ukrainian vehicles.

Troopers wearing Turkish-style body armor and British-style helmets disembark from YPR-765s, which are Dutch variants of the classic American M-113 APC. Tank crews fire the 125-millimeter main guns of their uprated T-72M1s. Poland has pledged more than 200 of these T-72s to Ukraine as part of a larger arms package.

It’s an eclectic mix of weaponry, overall—and it speaks to the wide range of foreign support for Ukraine’s armed forces, as well as those forces’ growing need for weaponry as tens of thousands of reservists complete their training and form new units.

A brigade riding in a mix of Polish, Dutch and Ukrainian vehicles is likely to run into logistical problems as maintainers struggle to source a frankly bizarre mix of spare parts.

But coherent training is more important than a coherent table of organization and equipment is, as the Russian army repeatedly has demonstrated in its own faltering Ukraine campaign.

Russian units use Russian weapons, across the board. But that materiel simplicity hasn’t helped the Russians to cross a river while under fire, safeguard their command posts or sustain a local attack over a distance of more than a few miles.

It’s unclear which unit the training video depicts. The videographers obviously took pains not to show the trainees’ unit patches. It’s possible it’s a new reserve brigade. It’s equally possible the brigade is preparing to roll south in order to join an older reserve unit, the 60th Infantry Brigade, which has been fighting the Russians around Kherson since early in the current war.

The timing of that deployment is critical. The arrival of a fresh mechanized brigade with a hundred tanks plus APCs, artillery and infantry could be the trigger for a more determined Ukrainian counteroffensive.
Click to expand...

The Ukrainians have won the Battle of Kyiv. Some of Kyiv’s territorial defense soldiers have repositioned to defend against a new offensive.

This missive from Mariupol's occupation city council is at least honest (Google translation from Telegram post in Russian) -- highlights mine .... 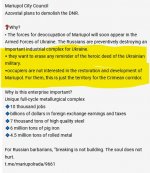 Kirkhill said:
https://twitter.com/i/web/status/1526222097617502209
Forbes article about Ukraine standing up a new Brigade in Krivyi Rih from scratch with scratch soldiers.


The Territorials got a new General on May 16. Two days ago.

The Ukrainians have won the Battle of Kyiv. Some of Kyiv’s territorial defense soldiers have repositioned to defend against a new offensive.

I anticipated Ukraine forming new brigades there last week, can't wait to see this June counter attack they are planning.

Word from RUS regional media that about 90 Azovstal prisoners have been taken to Russia (most are reportedly in occupied Ukraine facilities) (Google translation attached - archive link of original article in Russian). If the sources are to be believed, it looks like "prisoners of war who are convicted of participating in the Azov regiment recognized by Russia as extremist and banned, will be tried in the (RUS) Southern District Military Court."

Some of the Ukrainian prisoners of war who surrendered to the Russian army after 82 days of defense of the Mariupol Azovstal plant were taken to the city of Taganrog, a source in the power structures of the Rostov region told a 161.RU correspondent.

- 89 people were brought to us, almost all of them are combatants (which means they are covered by the Geneva Convention. - Approx. ed. ). <...> From Taganrog they will be distributed further. In the region, too, our part will remain. They are now an important object [for exchange], — said the source.


According to Reuters with reference to the Ukrainian authorities, on May 16 alone, more than 250 Azovstal defenders surrendered to the Russian military. According to correspondents of the British edition, 53 wounded Ukrainians were taken to a hospital in the Russian-controlled city of Novoazovsk, others were taken to the territory of the Donetsk People's Republic. The Russian Ministry of Defense reported that by the evening of May 17, the number of those who had surrendered had reached 954 people.

The source of 161.RU claims that some Ukrainians brought to Taganrog were found with chevrons of the SS divisions “Galicia” and “Totenkopf”.

The head of the Rostov Public Monitoring Commission, Igor Omelchenko, in a commentary to 161.RU, suggested that the Ukrainian prisoners were placed in the Taganrog SIZO-2 , which, according to him, was released from those arrested in the spring. He called the information that the Ukrainians could be taken to the Rostov pre-trial detention center on Maxim Gorky Street unlikely.

According to an editorial source in law enforcement agencies, prisoners of war who are convicted of participating in the Azov regiment recognized by Russia as extremist and banned, will be tried in the Southern District Military Court.
Click to expand...

Soldier35 said:
Today the first trial will be held in the city of Rostov-on-Don over the soldiers of the Aidar battalion who surrendered. Denis Maruga, who took part in the explosion of the bridge in 2019, as a result of which people were killed, will appear before the court. Muryga personally confessed to this during the interrogation. In total, 1,700 soldiers of the Ukrainian army have already surrendered from the Azovstal plant.

@Soldier35 many people are surprised that Russian soldiers just don’t follow their doctrine and use ‘беспредел’ (lawlessness) to kill this man.

Ignoring the Laws of Armed Conflict seems to have worked to Russia’s favour in Chechnya, Georgia and we have seen them try to intimidate Ukrainians more recently in cities such as Буча, by behaving like violent animals.

Can we kick Turkey and Croatia out of NATO and swap them for Sweden and Finland?

RangerRay said:
Can we kick Turkey and Croatia out of NATO and swap them for Sweden and Finland?
Click to expand...

Finland, Sweden, and a bag of pucks.

Soldier35 said:
. . . . Russian kamikaze drones "KUB-UAV" were used for the strike. After the drone strike, the artillery battery of Ukraine went into the forest, after which they were hit by Russian artillery. The video is cropped due to poor quality
Click to expand...

This descriptive could apply generally to the full range of Russian military operations.

Blackadder1916 said:
This descriptive could apply generally to the full range of Russian military operations.
Click to expand...

funny thing with the tank video it has sounds of the gun firing. That totally added in edit as the drone filming is not picking up that sound.
You must log in or register to reply here.

"Why does Canada buy Mosin rifles in huge quantities in Ukraine?"

Russia’s military gamble in Syria is paying off handsomely But for how long?