Eye In The Sky said:
I know I'm only a line sqn operator, but I think this is the one the fleet should commit a standing Det to.  The mission is important and we can offer some mission value there, but it should be consistent and persistent.
Click to expand...

All of a sudden, no one is sick, lame or lazy in the LRP fleet  :nod:

Dimsum said:
All of a sudden, no one is sick, lame or lazy in the LRP fleet  :nod:
Click to expand...

Yup. People with MELs that basically say "Mbr may live life at own pace" come off T-Cat to deploy.
D

Jarnhamar said:
Yup. People with MELs that basically say "Mbr may live life at own pace" come off T-Cat to deploy.
Click to expand...

The best treatment for NATO knee is tax-free status.

Flight deck is a bit empty for tanning stations on Arctic patrol vs Op Caribbe.  :cold:

Jarnhamar said:
Yup. People with MELs that basically say "Mbr may live life at own pace" come off T-Cat to deploy.
Click to expand...

In all honesty, we don't have much of a problem that way in LRP.  Crews aren't places broken people stay;  they are out the door too often and not many of the places we go to legitimately suck anyways.

Unless CJOC gets involved, like the Norway ex (Trident Juncture?) last fall.  That was unnecessarily stupid (second hand stories...I was elsewhere at the time).  I went to Andøya on another trip and loved it; the crew that went to TJ couldn't wait to get the hell away from there just to clear the 'stupid zone'.

"Hello, Canadians - welcome to our backyard" …

The news comes at a time of heightened tension between Beijing and Ottawa.

The news comes at a time of heightened tension between Beijing and Ottawa ...
Click to expand...

A pair of frontline Chinese Su-30 fighter jets buzzed HMCS Regina Monday in the East China Sea, in international waters east of Shanghai. The formidable twin-tail Russian-built strike aircraft flew within 300 metres of the Canadian ship’s bow, screaming past about 300 metres above the water.

It was the first such close encounter between a Chinese warplane and a Royal Canadian Navy warship. It comes at a time of heightened tensions between China and Canada, triggered by Canada’s plan to hold an extradition hearing to the U.S. for a senior Chinese businesswoman whom Washington accuses of violating sanctions on Iran.

The noisy fly-past came after the Canadians had spent days observing as many as a dozen other Su-30 fighter jets flying at least several kilometres away from the ship. While more aggressive than anything the RCN has seen before from Chinese fighter jets, those aboard HMCS Regina did not consider the Su-30s’ actions to be unduly provocative or hazardous.

“This was not a dangerous scenario but it is one that we certainly paid close attention to,” Regina’s captain, Cmdr. Jake French, said. “I will not characterize their intent, but we have seen a lot of ‘fast air’ over the past week flying from where many of their bases are.

“It is normal for air forces to check foreign navies operating in their backyard. Seeing the proximity of Chinese forces is part of the business. This is what militaries do.”

Relations at sea with the Chinese military have been “professional and cordial,” the commander said ...
Click to expand...

300m might be considered close to sfc vessels.  The intercepts with the CP-140 crew last fall were...."somewhat closer" at times.

There are some areas in that AO that the Chinese are more...touchy...about.  I'd also guess the Regina is of more interest to them now that they have the Cyclone onboard.

Along the way, Regina discovered a half-submerged People’s Liberation Army Navy Kilo-class attack submarine. “We saw the Chinese periscope and mast. We got a close look at it,” French said of the Russian-built submarine, which was first spotted by Regina’s new Cyclone helicopter and later became clearly visible to anyone on the Canadian frigate’s deck or bridge. Other than to say it seemed the submarine was headed toward its home waters, he declined to speculate as to why the diesel-electric submarine, which normally goes to great lengths not to be detected, was so unusually easy to find.
Click to expand...

And, some dirty pool.

The Canadian ship located and tracked tankers that may be involved in smuggling fuel to North Korea in violation of UN sanctions and someone aboard one of those vessels lasered Regina’s RCAF helicopter crew.

The green laser beams are insidious weapons that can cause blindness and other serious eye damage. The lasers were aimed at the Canadians as their helicopter flew about 80 kilometres off the Chinese coast. Nobody was hurt during the attack.

“It is a safety issue and there has been an increase in incidents at sea lately,” Regina’s skipper said. “Our crew were wearing protective safety lenses just in case.”
Click to expand...

Doesn’t seem that bad when the distance is in feet.

I consider anything less than 300 feet to be close.

*According to cbc they were 100ft off the water as well.  CBC also mentioned that the jets were not unexpected.

Aboard HMCS Regina – A Chinese coast guard vessel recently came within about 700 metres of HMCS Regina during a rare transit by a Canadian warship through hotly disputed waters in the South China Sea and Strait of Taiwan.

The unexpected incident near the southern mouth of the strait briefly caused some anxiety on Regina’s bridge. However, Canadian sailors praised the Chinese mariners for their seamanship and courtesy as a series of Chinese warships and coast guard ships – never more than three at a time – shadowed HMCS Regina and the Canadian replenishment ship, MV Asterix. The Chinese followed the Canadian ships for more than 1,000 kilometres as they made their way north through the Strait of Taiwan to the East China Sea.

The voyage through the strait put the Canadian ships in waters between China and Taiwan, which is independent but considered part of China by Beijing.

Chinese interest in what the Canadian ships might be doing appeared to increase as they entered the strait, much of which is claimed by both China and Taiwan, and is considered a potential flashpoint if the two countries ever come to blows.

Taiwanese warships and coast guard vessels also followed the Canadian ships as they transited the strait.

“I never felt there was anything unsafe or unprofessional in anything the Chinese or Taiwanese did,” said Regina’s captain, Cmdr. Jake French. “What we observed were common maritime practices by the Chinese and Taiwanese.”

For more than a week now, six different Chinese warships, usually operating in pairs, have played a cat-and-mouse game with the Canadians by bracketing or trailing their ships. The shadowing began almost immediately when they had completed a brief exercise with the Vietnamese navy after making a port visit to Cam Ranh Bay, Vietnam, last week.

The Chinese observed an exercise involving the Canadian ships and three Japanese warships, including a helicopter destroyer that some analysts have described as a small aircraft carrier.

At one point, in shallow waters near the southern mouth of the Strait of Taiwan, the Chinese repeatedly hailed the Canadians to ask where they were headed and to tell them to take new course headings. The Canadians initially answered a few of the dozens of hails to identify themselves, but there were so many similar hails and answers that they finally stopped replying. Taiwanese warships also shadowed and hailed the Canadians. The Taiwanese sailed just to the east of the Canadians while the Chinese sailed just to the west, creating an interesting tableau on the sea ...
Click to expand...

Bumped with the latest from the info-machine ...

These global sanctions, designed to pressure North Korea into verifiably and irreversibly abandoning its weapons of mass destruction programs, restrict the transport of fuel and other sanctioned commodities into North Korean ports. Since 2018, Canada has been supporting international efforts to reinforce the UNSC resolutions by deploying military assets in the region. Earlier this year, the Government of Canada extended Operation NEON to 2023.

The CP-140 Aurora is a long-range patrol aircraft used for multiple types of missions over land and water, with a highly trained crew, and is well-suited for this mission. The Aurora Air Detachment will be operating in the region for roughly one month ...
Click to expand...

Eye In The Sky said:
A particularly challenging mission and op area...
Click to expand...

It's one of the main focus-points on missions, yep. It sounds simple...and the...realities...there make it (sometimes very) challenging.

It is/can be an EXTREMELY contact-dense waterspace; this offers 'camouflage' for people who don't want to be found which is enhanced with some simple, but effective TTPs (that I shouldn't elaborate on here, but I'll see if I can find something open-source that might speak to it some).
Last edited: 20 Oct 2021

Eye In The Sky said:
It's one of the main focus-points on missions, yep. It sounds simple...and the...realities...there make it (sometimes very) challenging.

It is/can be an EXTREMELY contact-dense waterspace; this offers 'camouflage' for people who don't want to be found which is enhanced with some simple, but effective TTPs (that I shouldn't elaborate on here, but I'll see if I can find something open-source that might speak to it some).
Click to expand...

Dude, driving a Ship in that entire region is a bloody experience. I haven't been through the Sea of Japan but have done South China Sea and the Sulu Sea. My Navigator had been through both and he said it's the same. Malacca was another experience as well. Nothing gets your heart racing like a night transit through there.

The South China Sea contact density was unreal at some points. Conducting Air Ops being particularly difficult as it was very difficult to get a suitable flying course where you weren't running someone over and your Final Approach Area was clear.

I'm far from an expert, but yeah, the general area looks pretty busy to me (source)... 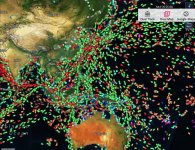 Humphrey Bogart said:
Dude, driving a Ship in that entire region is a bloody experience.
Click to expand...

I can't imagine how fun it must be. I remember "building the surface plot" going ONSTA the first time and thinking "sweet Jesus effin christ!!!!".
You must log in or register to reply here.

J.L. Granatstein: Canada has pressing national interests. We should spend to defend them