If you have your LAV crews as a separate unit attached to the Infantry Battalion, then you won't need to rejig the Battalion structure if they go on tasks that don't require the LAV's. If say you send the battalion to the Arctic, you don't have large holes in your command structure?

Technically then the LAV unit could work with other units while they host unit is away.

Colin P said:
If you have your LAV crews as a separate unit attached to the Infantry Battalion, then you won't need to rejig the Battalion structure if they go on tasks that don't require the LAV's.
Click to expand...

Currently, each company has 3x Pl HQs. Instead, it would be 4x Pl HQs, the 4th being the LAV Capt.

If the Battalion got tasked to force generate as a Light Battalion for whatever reason, we'd simply adopt a light infantry model....the LAV crews would just get tossed into the platoons, bringing them from 7-man sections up to 10-man sections. The LAV Capt would just go with Coy HQ (where he may or may not be req'd, so might end up as an LO or something... there's some flexibility there).

The LAVs would remain in the LAV Barn.


Colin P said:
If say you send the battalion to thue Arctic, you don't have large holes in your command structure?
Click to expand...

I don't see how the command structure has changed at all.... you'd have one less sub-sub-unit HQ per company.


Colin P said:
Technically then the LAV unit could work with other units while they host unit is away.
Click to expand...

I mean, if they want to deploy on a light infantry task with 7-man sections because that's  what they've determined the task requires, sure. In reality we are never fully manned, so taking the LAV crews as dismounts while the LAVs remain in the barn would probably bring them up to 7-man sections.

ballz said:
We were just talking about how a mechanized infantry battalion could operate, to what would be best suited to force generate for an international tasking. Suffice to say, you seem a bit all over the map.
Click to expand...

I've been monitoring a couple of other conversations as well.  Sorry for being drawn off piste.

The Mech Infantry dilemma of how do you train for so many skill sets and then what happens when you are inevitably tasked to go on a mission that doesn't require one or either skills sets affects the entire army.  How many gunners do we have deployed right now pulling lanyards?  How many tankers trundling to the green field beyond?  When I look at our structure today I ask myself do we still require all these capabilities (I think yes) and if so how do we balance the requirement to train them while acknowledging that folks will likely go out the door in a very different capacity.  How do we make our soldiers understand that.

I tried doing the training split within my Coy two falls ago.  I had a week of section level dismounted training programmed culminating with level 2 live.  Concurrent to this the crews were supposed to be off with the LAV Capt.  Manning got the better of me and the requirement for staff on the range nixed most of the LAV Capt's plan.  This leads to two points.  We should decide on a structure and then get everyone on the same page.  If you have a Coy where the LAV Capt owns the LAVs and another where they don't then from a Bn HQ perspective the different trg requirements of those two coys will be missed.  Second, a LAV Coy means there is an entire subunit with the required leadership devoted to LAV skills.  Merry up with the rifle coys happens at Lvl 3 I would suggest.  This allows for basic hand and feet stuff to get worked out, give the platoons to do a few patrols and then get familiarized with the LAVs and their team before starting to work as a mechanized sub unit.

A lot of these discussions seem to pop up every few years. I'm migrating more to the idea that the USMC uses, where things like the vehicles are not even "Regimental" assets at all, but in our context would be a Bde or Battlegroup asset, essentially its own unit. This would certainly allow for many mix and match combinations, you could imagine a light infantry deployment, but giving Engineers section carriers because they need to cover a large area. Of course the argument will arise that you will have a very large and resource intensive unit since you would theoretically need to be able to mount up everyone at once, but rarely do so in practice.

What is the sweet spot? Should we have enough assets to ensure being able to mount 66% of the brigade at any given time? 33%? 25%? This can also give rise to other combinations - if we have enough LAVs to mount 50% of the battlegroup should we get enough Bv-10's to mount the other 50% (providing lots of flexibility to move the battlegroup mounted through the arctic or other marginal terrain). Separating the vehicles and their resource management from the units opens up different possibilities.

This works for the Marines because it is aligned to their force employment concept, which is based around amphibious operations.  Marine battalions are assigned to MAGTFs that may or may not be shipborne, and may or may not require mechanized transport.  When they do, the MAGTF is assigned the appropriate transport.  This is also why the Marines are one of the last services to feature an Infantry pure formation at the Regimental (III) level.

Our Army does not have a similar concept, so I'm not sure the same outlook would suite us.

As I recall, and I was part of a team that was to track the Coalition plan and execution, VII Corps was the main striking force with an aim of destroying the main Iraqi force in the area south of Basra by bypassing Kuwait and striking NE. The Marines on the ground were pair of a decoy attacking into Kuwait, while the embarked Marines were also a decoy as the hydrographic (?) did not support an amphibious operation into Kuwait.

By the way, that was basically the estimate I had prepared in October/November as the probable American concept of operations. Why or how the Iraqis failed to see the obvious is beyond me. Shwartzkopf (sp) may have called it when he stated that Sadam was not a practitioner of the military art.

Add: By the way, thanks to considerable input from J4 Mov, we were able to predict that the American buildup would probably lead to a ground attack in the last half of February.

Since this a mech thread The Marines lacked having an IFV, but their tracked amphib tractors became the substitute. They also utilized their LAV's as well in addition to their Abrams. 2d Marines were reinforced with Army mech units. 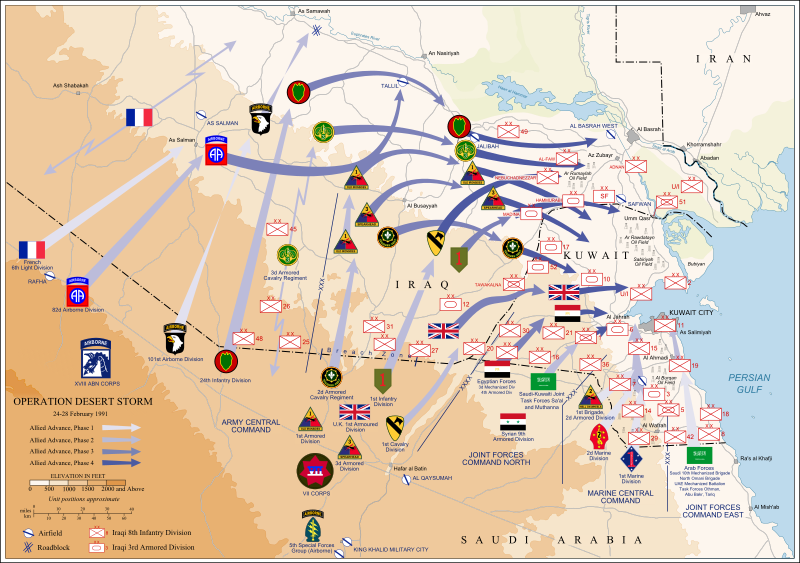 I've had this article open in my browser for two months now, finally got around to reading it.  My previous thoughts remain extant but two other points came up.

1. The US is good at having standards.  Where is Canada's gunnery table?  What is the gateway training required, other than bore sighting and zeroing, for a crew to hit a level 2 range?  The corps had a guy in the Armour School's gunnery cell a few years back that was building the equivalent of an AFV CFOSP.  He's been out of that job for over two years now and as far as I know it still hasn't been published. Junk.

2. I've read a bunch of articles like this one in Infantry dating back to when the Bradley was first brought into service.  I am always struck by the concern over gunnery.  It's not that gunnery isn't important but I think it shows a difference in perspective from us.  I would suggest that in Canada we see the LAV in support to the section (while not fully acknowledging the demands that the LAV creates on the section and the rest of the unit, which is related to point 1 above) while in ABCT's in the US the section supports the Bradley and the tanks.
You must log in or register to reply here.

The Pity of War - Is leading one’s own troops to slaughter ever justified?

‘Defence’ doesn’t fit the job of Canada’s military any more. Let’s create a Department of National Safety instead
2 3

Origin of Covid — Following the Clues