The first time I started watching this video I paused it and looked for other videos because I thought it was fake.

It's pretty incredible. Imagine what kind of options a commander would have if he had 100 soldiers who could strap this jet board to their feet and move 25 kilometers in 10 minutes, flying Nap-of-the-earth or possibly above eye sight. Maybe fly 10kms behind enemy lines, do some damage and fly back out.

It has a max speed of 93MPH and can fly for up to a predicted 30 minutes with the pilot wearing a backpack full of jet fuel. Operational ceiling is 10'000 feet without O2. 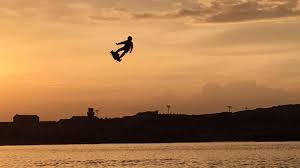 Jarnhamar said:
The first time I started watching this video I paused it and looked for other videos because I thought it was fake.

It's pretty incredible. Imagine what kind of options a commander would have if he had 100 soldiers who could strap this jet board to their feet and move 25 kilometers in 10 minutes, flying Nap-of-the-earth or possibly above eye sight. Maybe fly 10kms behind enemy lines, do some damage and fly back out.

It has a max speed of 93MPH and can fly for up to a predicted 30 minutes with the pilot wearing a backpack full of jet fuel. Operational ceiling is 10'000 feet without O2.

This would be an excellent option for the defaulters

A different view of Jetpacks....

Jetpack muthafucka is a short hand joke between my wife and I....
A

Some more info about the Flyboard.
https://www.redbull.com/ca-en/zapata-flyboard-air-franky-zapata-profile

As should surprise absolutely no one, the Nazi's had an experimental flight apparatus (it is a highly modified pulse jet, but the mode of operation is very rocket like...)

The “Himmelstürmer” (Sky Stormer - but literally Heaven Stormer) flight pack was an experimental project that would allow German combat engineers and infantry to cross bridgeless waters, minefields, barbed wire, and other obstacles without hindrance.

As such, the device had to be for short duration “jumps” of ranges up to 50-70 meters. This was not meant to be a individual flying machine to achieve any sort of altitude or long flight journey, so emphasis was placed on finding a suitable type of propulsion to accomplish the limited jump range.

The Schmidt pulse jet seemed ideal for this, but since a pulse jet cannot operate without forward airspeed, the units involved were adapted and force-fed oxygen by a separate oxygen tank. Paul Schmidt patented his pulse jet design in 1931 but the unit involved here should not be confused with the V-1 flying bomb Argus-Schmidt pulse jet. These Schmidt pulse jets were small pulse tubes able to be carried by one man..

The apparatus involved strapping on two Schmidt pulse tubes - one on the back for forward flight and a smaller, less powerful unit carried ventrally for simple control with hand grips for steering.

Both pulse tubes had to be ignited at the same time to enable proper jumps. The units consumed 100 grams of fuel per second. Flight duration was minimal and both units had to be turned off immediately upon landing.

These devices were tested with a Heer unit in late 1944 but were still in the experimental phase once the war ended. One of the devices was reportedly taken to the US and handed over to Bell for tethered experimentation (as no US test pilot wanted that duty!) Deemed as unsafe, the Himmelstürmer unit was disposed of as Bell sought out a new way to equip US Army soldiers with a flying unit. By 1958 Bell had started its own development of a “Jump belt” design under “Project Grasshopper”. This unit used canisters of nitrogen for limited propulsion but the device proved impractical and was ultimately dropped.

After the failure of the Grasshopper Jump belt experiments of 1958-59 Bell employee Wendell Moore designed his famous Rocket Belt in 1960. It could enable flight for 20 seconds!

But unlike the Schmidt pulse tubes, Moore’s Rocket Belt used  a chemical reaction to produce high-pressure steam at 1,375 degrees Fahrenheit which was then channeled through two bent-downwards insulated tubes behind the operator’s back to produce roughly 300 lb thrust, enough to enable short flight. Even so, a heat-resistant flight suit is required whenever flying this unit.

The German pulse tube operation required no special protective gear as they were designed only for combat engineers and basic infantry as emergency equipment. Wherever possible plastics were used for the fuel bottle units and complexity of design kept to a minimum. Thrust from the units was of short duration and directed outwards from the user to prevent accidents. Test pilots were instructed to start with very short hops and then slowly advance to sustained jumps, usually no more than 50 meters. But some pilots pushed the units up to 70 meters.
The Himmelstürmer was not meant to be mass-produced for the German Army but as  specialty equipment for certain combat scenarios involving obstacles.

Although rumors of “Fliegende Sturmtruppen” (Flying Stormtroopers) was spread about no further advanced development of these units was planned for wider usage by the Wehrmacht. Bell ultimately succeeded in a limited duration working flying pack but the inspiration came from the German World War II Himmelstürmer.
Click to expand...

Somewhat accurate model of the device:

Just thought it was a cool video, fits perfectly with the thread

Instead of a boat full of dudes following this guy with a ladder get 30 dudes with the jet suit, rig a gun up to the suit, and you're in business.

The platform is designed like a flying bike, which can be operated manually, remotely or fully remotely-controlled with no rider to reach top speeds.

Because of its envisioned speed and lift capabilities, the HSVTOL will be able to deliver cargo in environments where a slower-moving helicopter could be a target for enemy defenses, he noted.
Click to expand...

I can see where a C130 would air drop a few of them, where they would self start and then be remotely flown into to pick up a team of SF in trouble.
J

No built-in redundancy? Looks great though. Maybe it would appeal to modern day kamikaze types.

Ironman becomes real. Cool
You must log in or register to reply here.